Theory without practice is just as incomplete as practice without theory

For months, the wooden frame rising at 88th and Vermont stood as a constant reminder of the unfulfilled promise of Proposition HHH, the $1.2-billion bond for homeless housing that Los Angeles voters approved more than three years ago.

Finally on Monday, there was a grand opening. The development is the first to open of about 20 projects under construction. Work will begin on another 30 in 2020. 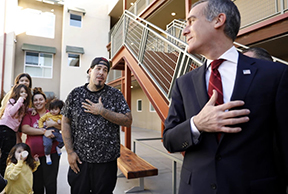 “As we celebrate today the opening of the first HHH housing project … it is the first of many to come,” Mayor Eric Garcetti said. “We see here in plain sight what a vision is when it manifests itself physically.”

Initially scheduled to open in October, the 62-unit project, known simply as 88th and Vermont, was supposed to be one of three HHH-funded projects to open in 2019. It did open quietly in mid-December but was the only one to do so.

On Monday, the building became the setting of a jubilant celebration, as city and county officials and nonprofit leaders gathered to mark the beginning of the Proposition HHH payoff.

While acknowledging that the rollout of the ballot measure has had its problems, officials characterized 88th and Vermont as a turning point.
The first Proposition HHH-funded housing project has opened in South Los Angeles.
(Christina House / Los Angeles Times)

“This year, we will see an opening of one of these about every three weeks,” Garcetti said. “My calculations, next year it might be every two weeks or less.”

The mayor lauded the change the 88th and Vermont project had made for a family of seven, who were among the first dozen tenants. After losing their home, they had couch-surfed, lived in shelters and motels, and “spent way too many nights in their car,” he said.

The mother of five told Garcetti that the hardest part was when her children said they wanted to go home.

“Finally, last week, that’s what they did,” the mayor said. “They’re going to know where home is, and that means more than anything. We want everybody in the city to know what that means, to come home. We’re not going to slow down until we get there.”
A one-bedroom unit is shown during a tour of 88th and Vermont in South Los Angeles.
(Christina House / Los Angeles Times)

A subtext of the celebration, however, was the certainty that, with homelessness increasing, all of the housing funded by Proposition HHH would not be enough to keep up.

“This is just the beginning,” said Elise Buik, president and chief executive of United Way of Greater Los Angeles, which was a major backer of Proposition HHH and the Measure H countywide sales tax for homeless services.

The initial public campaign for the ballot measure had promised 10,000 units in 10 years. To meet that goal, the city would have to build another 300 housing units a year using other funding.

Historically, the city has been able to build that many units per year, but since the bond measure passed in 2016, the pace has fallen.

Even that goal of 10,000 units is now too small, as it was based on past homeless counts when the population was smaller. With the number of people living in tents and makeshift shelters on the city’s streets ballooning to 27,000 out of 36,000 overall, and the number of chronically homeless Angelenos increasing, the current pace of construction is not keeping up.

“Prop. HHH and Measure H are a down payment,” Buik said, tacitly suggesting that additional tax measures may be proposed in the coming years.

The community room is shown during a tour of 88th and Vermont.
(Christina House / Los Angeles Times)

According to the website of the city’s Housing and Community Investment Department, the 112 projects funded by Proposition HHH will produce 7,484 units, of which 5,773 will come with services for chronically homeless people, veterans and young adults. Another 1,587 units will be reserved for low-income tenants.

Another 1,000 housing units are being built through Garcetti’s innovation program, using $120 million from Proposition HHH. 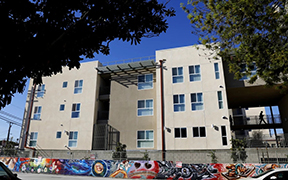 The 88th and Vermont project has 46 units of supportive housing for adults 18 to 25 years old, veterans, and households with people experiencing chronic homelessness. The remaining 14 units are set aside for very low-income families and individuals, as well as two units for on-site managers.

The 88th and Vermont project cost $34 million and received just under $9.7 million from Proposition HHH. At $549,500 per unit, it reflects the upward trend in the cost of housing. The most expensive HHH projects have run more than $600,000 per unit.